Competition of student theater studios of Branches of foreign universities in Tashkent and Tashkent region, under cooperation within the framework of a joint MEMORANDUM on the implementation of five initiatives of the President of the Republic of Uzbekistan was held in the Branch of Moscow State University in Tashkent. 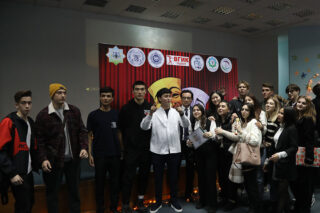 On November 28, 2022, participants of student theater studios of seven branches of foreign universities showed their talents on an an improvised stage.

The students of the Tashkent branch also took part in the competitive program.

The development of student theatre-studios is of great importance, since it is young, promising student theater-studio teams that make up the great creative potential of the youth of universities. All the teams participating in the theater competition showed their creative talent, skills and abilities, demonstrating their ideas, as well as scenes from world-famous works of popular writers.

Master class of the Branch graduates