Delegation of students and teachers from Tashkent Branch of Plekhanov Russian University of Economics. The first step in the visit program was the laying of flowers at the monument to the great Uzbek poet Alisher Navoi and a sightseeing tour of the capital. The guests visited a tour of the REU campus, and after that they met with activists of the student council. 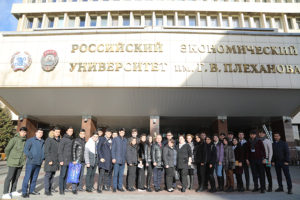 Chairman of Council Elena Martynova held a fascinating intellectual game dedicated to the activities of the student council. Students of the Tashkent branch spoke about their successes and achievements in the field of social and educational work with youth.

The delegation took part in the celebration of Shrovetide, tasting the traditional treats – pancakes, crackers, bagels, without forgetting to participate in the team tug of war. During their visit, students and teachers of the Tashkent branch met with the Rector of PREU Viktor Ivanovich Grishin and vice-rector for further education and branches Asali Magomedalievich Asaliev. They congratulated the students and the management of the branch on the 25th anniversary of the branch.

The program of the stay at the university ended with a meeting with representatives of the Captains School of Business, where students talked about the opportunities that they receive at the university and about their achievements in project activities. Further in the program of the delegation’s stay there are still meetings with representatives of the Embassy of the Republic of Uzbekistan and visits to historical places of Moscow dedicated to the 75th anniversary of the Great Victory. Almost all students visited Russia for the first time, and in order to be part of the delegation, each of them from the first days of study tried to be the best in various areas of the branch. Vice-rector A.M. Asaliev sincerely thanked the branch director K.Kh. Abdurakhmanov for giving distinguished students the opportunity to feel the spirit of the first economic university.

Branch scientists at the Conference