The Branch traditionally summed up the results of competition and announced the “Most Effective Manager of the Year”.

Final stage of competition: “Intelligent Marathon” was held at the Branch. It is a joint project of students’ scientific club “Manager”, which functions at the department “Labor Economics and Management” and Alumni Association of Tashkent branch of PREU.

The competition was held in the format of practical implementation of Five Initiatives of the President of the Republic of Uzbekistan Shavkat Mirziyoyev, which cover key aspects of development of state, creating conditions for upbringing and educating youth, and increasing the employment of women.

The competition is also timed to International Students’ Day. 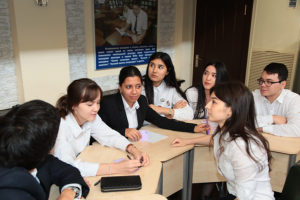 5 teams took an active part in competition. These are students of 1st and 2nd year students of Tashkent branch of PREU according to 5 profiles: Economics of social and labor relations; Finance and credit; Economics of enterprises and organizations; World economy; International trade. 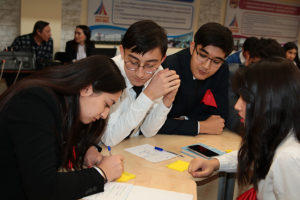 Graduates from our branch of past years competed with the students. They also joined the jury.

Chairman of the jury was a graduate of doctoral studies of Head University, Rector of Plekhanov Russian University of Economics in Tashkent, Academician of the Academy of Sciences of the Republic of Uzbekistan Abdurakhmanov K. Kh. 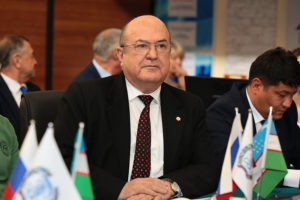 Sarikulov A.A. – graduate of Tashkent Plekhanov Russian University of Economics in Tashkent 2000; Ryabichenko D. – graduate of 2007; Pavlov D. – graduate of 2011; Saliev R. – 2016 graduate. In addition to them, graduate students from different years, including those who are abroad and successfully works in large companies, sent their video questions. 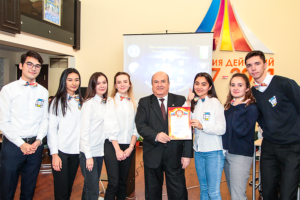 New format of competition was aimed at involving students in studying and implementing 5 initiatives of the President of Uzbekistan Sh. Mirziyoyev. All stages of competition were arranged in such way that student members of the teams had tasks of varying degrees of complexity and at the same time dedicated to each of five initiatives. The format of “Intellectual Marathon” allowed students to study, master, and implement practically directions laid down in five initiatives. In order to prepare for tasks of competition, and there were many of them, students had to show all their creative abilities and skills, abilities and additional knowledge, both in the field of art, music, theater, and computer technology, literature, and fine arts.

Interaction with graduates of the Branch over the years has also contributed to successful holding of the contest. An example of successful career and almost all graduates involved in competition occupy leadership positions, serves as additional motivation for active realization of abilities of the students.

Of course, the winners were determined – they became team of “Economics of Enterprises and Organizations” profile the leader of which was 2nd   year student of group 843, Sayfiddinova Dyora. During intellectual marathon, the team managed to show coordinated and productive work. The leader of this team was named the “Most Effective Manager of 2019”.

But nevertheless, the main goal of this competition is to attract students to constructive activities aimed at maximizing the realization of abilities and diverse talents, which, of course, are students of the Tashkent Branch of PREU.

Change of training mode in the Branch