At Tashkent Branch of Plekhanov Russian University of Economics there held a meeting of the Council for Cooperation between branches of foreign universities in Tashkent and Tashkent region, dedicated to aspects of joint implementation of Five Initiatives of the President of the Republic of Uzbekistan. 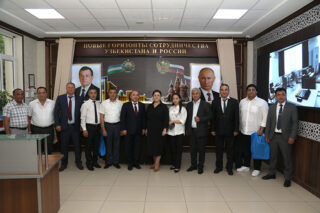 As Head of Tashkent branch of PRUE Academician Abdurakhmanov K.Kh. noted, a meeting of inter-branch council was organized as part of implementation of provisions of Memorandum of Cooperation between branches of foreign universities in Tashkent and Tashkent region.

Memorandum provides for mutual exchange of experience between universities in the field of improving effective mechanisms aimed at the comprehensive development of creatively thinking and harmoniously developed highly qualified specialists with high civic qualities, formation of their spiritual and moral values, consciousness and worldview, improving the methodology of systematic spiritual and educational work, as well as effective implementation of five important initiatives put forward by the President of the Republic of Uzbekistan.

Round table on cooperation in the field of education

The results of the year have been summed up, the winners have been determined: in scientific, creative and other events