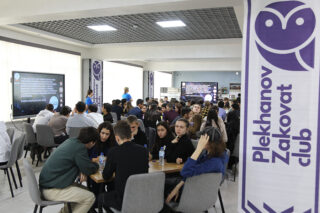 As part of the implementation of the Decree of the President of the Republic of Uzbekistan from January 20, 2022 “On measures to turn the intellectual game “Zakovat” into mass educational movement among the population and the development of other intellectual games”, “Plekhanov Zakovat Club” was created and successfully operates in the Tashkent Branch Plekhanov Russian University of economics.

Tashkent Branch of Plekhanov Russian University of economics is one of the first foreign Russian branches. We have been conducting successful scientific and educational activities for more than 27 years. And we have a lot of experience in organizing such events. That is why our branch became the initiator of the unification of all Russian branches within the framework of the youth forum of talented students. And the meeting today was organized as part of the implementation of the provisions of the Memorandum of Cooperation between the branches of foreign universities of Tashkent and Tashkent region.

History of the renowned Russian university

Master class of specialists from Germany