On June 21, 2022, an exhibition of works of artists – participants and veterans of the war was opened in Tashkent, in the Central Exhibition Hall of the Academy of Arts, under the support of the Embassy of the Russian Federation in the Republic of Uzbekistan. 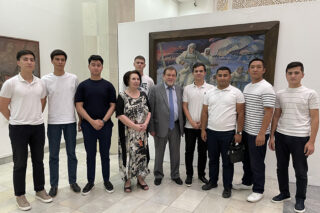 The exhibition opened on the eve of the 81st anniversary of the beginning of the Great Patriotic War and consists of works by Uzbek artists who participated in the war from the collection of the Directorate of Art Exhibitions.

Introducing the new generation of citizens of Uzbekistan with real evidence of wartime, the organizers of the exhibition pay tribute to the memory of the heroic generation, who bore all the hardships of the war on their shoulders, defeated fascism and defended the right of people to freedom – Uzbek soldiers and home front workers.

Teachers and mentors – guides of peace and prosperity!

Conference of employees and students of the University