In the large assembly hall, there organized a meeting between teaching staff and students of the branch with the representative of the Central Internal Affairs Directorate of Mirzo-Ulugbek region, Lieutenant Colonel Khasanov B.F. on the current topic – Illegal activities and the consequences of drug addiction among young people. 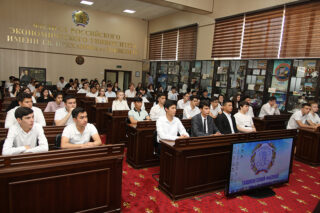 During the meeting, attended by students of academic groups of different courses of the Branch, representatives of relevant structures in an accessible form, vividly and with concrete examples and facts, spoke about the consequences of one of the most dangerous ailments of mankind – drug addiction and crimes among young people committed in a state of drug addiction.

The event for students