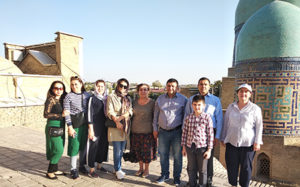 That is why in Tashkent Branch of PREU pays special attention to the development of domestic tourism and organization of effective leisure for students and faculty, conducting cultural programs with the visits to historical centers of Uzbekistan. These events are also aimed at development of domestic tourism and popularization of regional tourist destinations among teaching staff of the Branch. It should be noted that such trips are organized by Trade Union Committee of Tashkent Branch of PREU on regular basis.

Thus, on October 13, 2019, Trade Union Organization and Council for Work with Youth of Tashkent Branch of PREU was organized a trip to the city – museum of Samarkand for employees of the branch, as well as members of their families.

The off-site program began with the visit to Imam Al-Bukhari Memorial Complex, a complex of memorial, religious and spiritual and educational structures in the village of Hartang, Payaryk district, and Samarkand region.

The faculty and staff of the Branch also visited masterpiece of Islamic architecture of Medieval East Gur Emir Mausoleum in the center of Samarkand. This magnificent complex consists of madrasah of Muhammad Sultan – grandson of Amir Timur and later tomb of Amir Timur himself and his descendants. 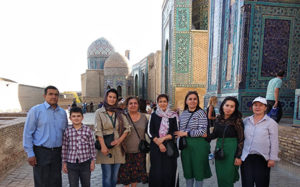 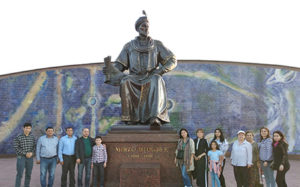 Many centuries ago, magnificent Samarkand was called as a “heart of Silk Road”, and Registan Square is the heart of Samarkand itself. Today it is a famous landmark not only of the city, but of the whole of Uzbekistan. Situated on a hill with a beautiful ensemble comprising three madrassas, it has existed for about 600 years.

Particular emotions caused a visit to Shahi-Zinda complex, consisting of a string of elegant tombs sparkling with blue colors. Harmoniously interwoven into a lively and moving composition, the mausoleums of different times are closely grouped along a narrow medieval street. Shahi Zinda consists of eleven mausoleums that were built one after another in 14-15 centuries.

As it was noted during the visit, Mirzo Ulugbek proved himself as a talented researcher in astronomy and mathematical sciences, well acquainted with the works of his predecessors. The result of his scientific work is so-called “New Astronomical Tables”, containing a summary of theoretical foundations of astronomy and coordinates of more than 1000 stars.

Meeting of the Academic Council of the University

Day of Teacher and Mentor at the Branch