Elections of the Leader of primary organization of Youth Union of the university took place in Tashkent Branch of Plekhanov Russian University of Economics.

In October 2019 preparatory work was carried out in Tashkent Branch of Plekhanov Russian University of Economics to organize the elections of the Leader of Youth Union of the Branch. 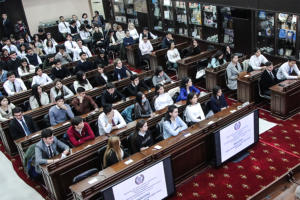 Electors from among students, representatives of leadership and members of the counting board gathered in large assembly hall of Tashkent Branch of Plekhanov Russian University of Economics

Students were already familiarized with the programs of 2 candidates – Guzorov Nurbek and Rakhimboev Farkhod. Voters, having carefully listened to their program statements, made their choice, giving their preferences to the candidates who presented the most vivid, substantiated and interesting projects. 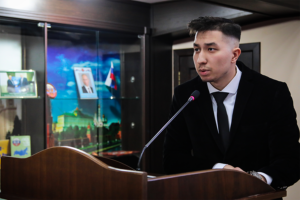 At final meeting they once again addressed the voters with their main points, after which a secret vote took place.

In accordance with Protocol of the Counting Board, according to the results of the vote, voters elected 2nd year student Rakhimboev Farkhod Nodirovich as their leader.

School of Activists is a universal educational project