The Branch conducted the events dedicated to the Day of Defenders of Motherland!

Union of Youth of Plekhanov Russian University of Economics in Tashkent organized a series of events dedicated to the Day of Defenders of Motherland, which are held from January 10 to 14, 2020.

The event dedicated to the Day of Defenders of Motherland was held in the celebration hall of new building. On behalf of the whole team, teachers and students, head of Plekhanov Russian University of Economics in Tashkent Abdurakhmanov K.Kh. congratulated everybody noting “… that today we congratulate our faithful and noble defenders, soldiers and sergeants, officers and generals, veterans of Armed Forces on the occasion of courage and bravery on the Day of Defenders of Motherland and wish good health, peaceful sky and love. We are proud of you”. 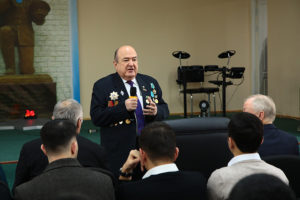 During the event, head of the Branch, Academician of Academy of Sciences of the Republic of Uzbekistan Abdurakhmanov K.Kh. emphasized the importance of this significant date of 28th anniversary of founding of our Armed Forces and deeply symbolic holiday of the Day of Defenders of Motherland. Respect for the attitude towards people who have chosen military professions. Military service is rightly considered a good school of courage and excellent tempering character. 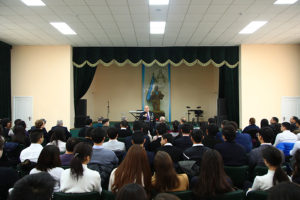 In his speech, he noted that patriotism is moral foundation of viability of the state, an important mobilizing factor in development of society, active civic position of individual, and readiness for service to the Motherland.

The Head of the Branch congratulated personally everybody, former soldiers and army officers from among teaching staff of the Branch, as well as youth of the university with this important holiday – the Day of Defenders of the Motherland.

Within the framework of the event a festive concert program was held with the participation of ensemble of the Ministry of Internal Affairs of the Republic of Uzbekistan, as well as congratulations prepared with assistance of Union  of Youth of PREU in Tashkent. 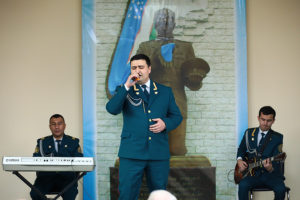 At the end of spiritual and educational event, guests of the Branch were awarded souvenirs and letters of appreciation for their active assistance in organizing ceremonial events dedicated to celebration of 28th anniversary of Armed Forces of the Republic of Uzbekistan and Day of Defender of Motherland. 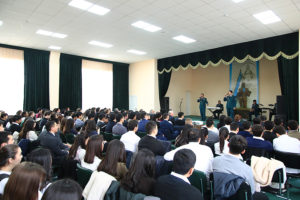 The ongoing joint events are increasing prestige of Armed Forces of the Republic of Uzbekistan and developing spirit of military patriotism and fidelity to serving Motherland.

Cultural and educational project in action