World AIDS Day was first celebrated on December 1, 1988, after a call to social tolerance and to increase exchange of information on HIV / AIDS was made at the meeting of health ministers of all countries. Celebrated annually on the 1st of December World AIDS Day serves to strengthen organized efforts to tackle HIV and AIDS pandemic spreading throughout world. Organized efforts are aimed at strengthening public support for programs to prevent a spread of HIV / AIDS, at organizing training and providing information on all aspects of HIV / AIDS. 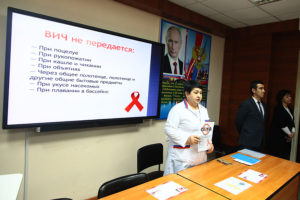 World AIDS Day has become an annual event in most countries. Although the 1st of December is defined as the date for the Day, many communities organize a series of events during the weeks and days before and after the official date.

A great attention is also paid to this issue in Tashkent Branch of FSBEI of HE “Plekhanov Russian University of Economics”. Council of Tutors of the Branch, together with specialists, medical practitioners, organizes lectures on HIV / AIDS prevention. 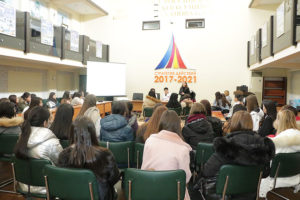 During the week starting from December 1, World AIDS Day, Branch holds special lectures for senior students, during which employees of the Branch medical center and activists of the Branch Youth Union make presentations on this topic and show relevant presentation material.

During tutor’s hours, doctor of the branch medical center discussed with students such problems as: drug addiction, early abortion, premarital relations. Lectures are aimed at making young people think about seriousness of AIDS problem and how they can protect themselves from HIV infection.

These events are a kind of appeal to each student: “Let’s stop AIDS together!”

Representatives of Rossotrudnichestvo in the Branch

Festive events at the Branch!