As a part of the work of Council of tutors for spiritual and moral development of youth, students and management of the Branch visited monument “Vatanga Kassamyed” and laid flowers at the monument, which represents loyalty to the Motherland, courage of sons of our people.

The monumental art complex, erected in the center of green park, serves as a spiritual example for young people, plays a decisive role and is of great importance in educating younger generation in the spirit of national idea, courage and perseverance. 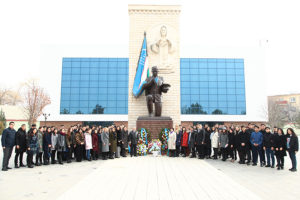 These days, a national holiday is widely celebrated in our country – The Day of Defenders of Motherland and 28th anniversary of Armed Forces of the Republic of Uzbekistan.

Today peaceful and quiet life of free and prosperous Motherland is our invaluable wealth. Since ancient times, our people value peace and tranquility. Defenders of peace and security of motherland are always held in high esteem and respect.

Students of the first? Second and third year of education under supervision of tutors visited reconstructed Zhasorat Park, where State Museum of Armed Forces of the Republic of Uzbekistan is located. 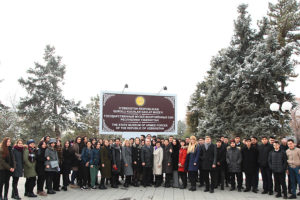 In accordance with the work plan of the Council of curators of the Branch of REU named after G.V. Plekhanov in Tashkent, curators of all academic groups of the university organized a joint curatorial clock dedicated to the Defender of the Motherland Day and a significant date for our state – the 28th anniversary of the Armed Forces of the Republic of Uzbekistan.

Bringing to students the essence and significance of the high results of large-scale reforms, promoting the potential and power of the national army, instilling in young people feelings of devotion and love for the homeland are of topical importance. As part of the curatorial events, the lecturers spoke about the features of the celebration of Defender of the Motherland Day and noted the importance of young people knowing the history of their homeland. Under the leadership of President of Uzbekistan Shavkat Mirziyoyev, reforms are underway in the Armed Forces of the country, fundamental reforms are underway, an effective system of competitive selection and training has been established for both officers and privates, and the military-patriotic spirit of the army has increased.

In the Republic of Uzbekistan, consistent work is underway to form a national army that meets modern requirements and standards, which is a reliable guarantor of the country’s independence, security and territorial integrity. As a result of large-scale work in this direction, service in the ranks of the national army today has become a high duty, an honorable and glorious work for every young man.