The team of students of Tashkent Branch of Plekhanov Russian University of Economics won 1st place in the interuniversity volleyball tournament. 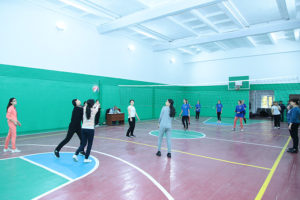 Students’ volleyball team of Tashkent Branch of Plekhanov Russian University of Economics won and took deserving first place. The winners were awarded with diplomas and medals.

Congratulating students with victory, Head of the Branch, Academician of Academy of Sciences of the Republic of Uzbekistan Abdurakhmanov K.Kh. emphasized that “… successful arranging of such events, as well as victory in them, is facilitated by the fact that over 24 years a great experience in their organization has been accumulated in Tashkent Branch of Plekhanov Russian University of Economics. There regularly conducted various events aimed at popularization of physical education, sports and healthy lifestyle among students, faculty and university staff. Health is the opportunity to have a fully enjoyable study, job, rest, and to fulfill the functions inherent in person and be physically strong and healthy, intelligent, educated, and intellectually developed young generation who make contributions to social progress. Not only teachers are involved in this process, but also the students are very enthusiastic and regularly involved in it as well. Student youth actively organizes and conducts events at the Branch and takes part in guest events, which once again emphasizes the relevance and opportuneness of the initiatives outlined by the President of the Republic.” 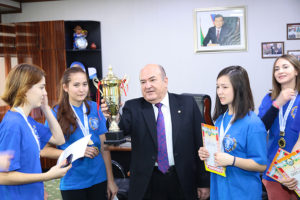 There regularly organized and conducted sports training on volleyball and other sports in Tashkent Branch in the view of implementation of five most important initiatives of the President of the Republic of Uzbekistan Shavkat Mirziyoyev in social and spiritual-educational spheres, in particular the second initiative is to training youth physically healthy, creating necessary conditions for sports, and in accordance with the plan of events within the framework of  roadmap of full member of the Academy of Sciences of the Republic of Uzbekistan Academician Abdurakhmanov K.Kh. for 2019. That’s just contributes to the fact that students’ team of the Branch achieve sporting success in inter-university tournaments. 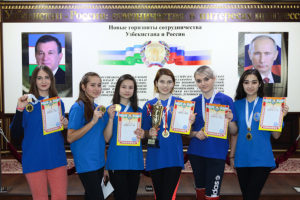 Round table on cooperation in the field of education

State Language Day at the Branch