A round table dedicated to this topic was held with the activists of the Council of the Society of Women and Girls Leaders of the Tashkent Branch of Plekhanov Russian University of economics. 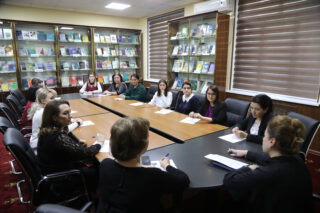 International Day for the Elimination of Violence against Women was established by the UN General Assembly in 2000 (resolution No. A/RES/54/134). The date was chosen in memory of the Mirabal sisters, who were killed in the Dominican Republic on November 25, 1960.

The General Assembly, in its resolution, invited governments, UN agencies, international and non-governmental organizations to hold events on this day that draw public attention to the problem of violence against women.

The UN Secretary General in his messages 2004-2005 repeatedly noted that violence against women is extremely widespread, inherent in all cultures and affects women regardless of their race, wealth, and origin. Women face violence in the legal sphere and in everyday life.

Implementation of the Roadmap of Academician Abdurakhmanov K.Kh.

Holiday Events at the Branch